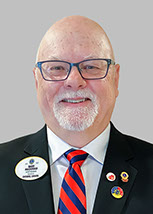 It can be found on the Documents Page

When asked about my theme for this Lions year, I had to think long and hard about what I wanted this year to be. Funny thing was, it was right in front of my face and has been for 35+ years! You see, my company sells consulting services in the fields of Crisis Management, Business Continuity and Disaster Recovery!  And there it was………

Our company helps clients figure out how to recover when their business is impacted by an unanticipated event – a fire, a flood, man-made or natural events. We help them recover to normal operations after an event.

What do I want for District A16 this year, actually all Lions around the world – to RECOVER!

My theme for this year is RECOVER; I want us to have a COMEBACK!

I wish each of you, your Families, your Clubs and your Communities to recover to a new level of normal for that is what we all have to work towards moving forward. Things may not return to what they were two years ago BUT, we will recover. Just like the Phoenix, we will rise up and we will continue to ROAR……..because that’s what Lions do!

A member of the Brooklyn Bedford Stuyvesant Lions Club since 1984, he has held many offices within the association, including club president, zone chair, region chair, vice district governor, district governor, cabinet secretary, cabinet treasurer and DGE group leader. He also served as a Lions Eye Bank transporter, a member of the District and Multiple District PDG Association, a trustee of the New York State and Bermuda Lions Foundation, and was appointed as the Lions representative to UNICEF-New York from 2012-2014. He has served on the USA/Canada Lions Leadership Forum Planning and Host Committees and has been a presenter at several USA/Canada Forums.

In recognition of his service to the association, he has received numerous awards including the club Lion of the Year, Club President’s Award, the Robert J. Uplinger Service Award, several District Governor Appreciation Awards, and the Multiple District Membership Growth Award.  He is also the recipient of numerous International President’s Certificates of Appreciation, seven International President’s Awards and the Ambassador of Good Will Award, the highest honor the association bestows upon its members. He is a Dr. Franklin G. Mason Fellow, a W. P. Woods Fellow and a progressive Melvin Jones Fellow.

In addition to his Lions activities, President Alexander is active in numerous professional and community organizations. He has served as chairperson of the advisory board for the New York Urban League and as a board member of the St. Francis DeSales School for the Deaf. He is also a recipient of the Congressional Record Award.

President Alexander has two daughters, and his partner in service, Shabiki Cazabon, is a Lion and a Progressive Melvin Jones Fellow.